Donald Trump got rid of Flash, otherwise everything else appears to be the same.

Ted Cruz went from a A+ rating to just an A (lost HSTS?).

Nothing changed for John Kasich.

Hillary Clinton went from an inconsistent server setup with many IPv4 addresses to just 1 IPV4 address.   The www. redirect behavior (from without to it) does mess up HTTPS Everywhere and ssllabs tests.     A major plus is she added HSTS to her site, so her ssllabs rating is now A+.

Bernie Sanders added IPv6 support and HSTS to the main site.  Unfortunately a sha2 intermediate certificate prevents his site from going from A to A+.  And his donation provider has HSTS setup correctly and get's an A+.

At this point in the campaign, only A ratings (ssllabs) are left!  The Democrats seem to have prioritized implementing HSTS, but neither appears to have gone for the preload list.

HSTS - Means you tell the browser to enforce SSL

You can find the raw data in this spreadsheet

I also included sub domains in this list, but it wasn't as interesting as I hoped.

I'm trying to evaluate if LibreOffice should keep support for them (specifically if the support is good). Unfortunately I can only generate the images using LibreOffice (or sister projects) which doesn't really provide a great test.

Please either: * Provide a link in a comment below * Email me B @ (If emailed, please mention if I can share the image publicly)

If I find the support works great I'd try to integrate a few of them into LO tests so we make sure they don't regress.

I know that the ffmpeg project has a huge set of sample images: https://samples.ffmpeg.org/image-samples/

Maybe this is of help to you,

Take a look at the File Formats wiki, they may have links to samples:

Please contribute to the wiki if you can.

I've done easy fixes (debdiffs) in Ubuntu and find I need to look up exactly how I want to do a debdiff every time.   Last time I had to look at 5 different docs to get all the commands I needed.   The bug I based this on was a debian only change (Init script), I plan to update it next time I have an actual source change.

My understanding is the current best practice is to use mk-build-deps, provided by the devscripts package, to install build dependencies. See https://wiki.debian.org/BuildingAPackage#Get_the_build_dependencies

With apt-get build-dep, the installed packages are marked as manually installed and so won't be offered for autoremoval. mk-build-deps creates a dummy metapackage with the build deps as dependencies. When that generated package is later removed, so are the build deps.

Or, add "APT::Get::Build-Dep-Automatic true;" to your apt.conf to mark the build deps as automatically installed so they will be removed with the next "apt-get autoremove"

UPDATE - I've removed the silly US restriction.  I know there are more options in Europe, China, India, etc, but why shouldn't you get access to the "open to the core" laptop! This would definitely come with at least 3 USB ports (and at least one USB 3.0 port).

Since Jolla had success with crowdfunding a tablet, it's a good time to see if we can get some mid-range Ubuntu laptops for sale to consumers in as many places as possible.  I'd like to get some ideas about whether there is enough demand for a very open $500 Ubuntu laptop.

Would you crowdfund this? (Core Goals)

Stretch Goals? Or should they be core goals?

Will only be added if they don't push the cost up significantly (or if everyone really wants them) and can be done with 100% open source software/firmware.

Take my quick survey if you want to see this happen.  If at least 1000 people say "Yes," I'll approach manufacturers.   The first version might just end up being a Chromebook modified with better specs, but I think that would be fine. 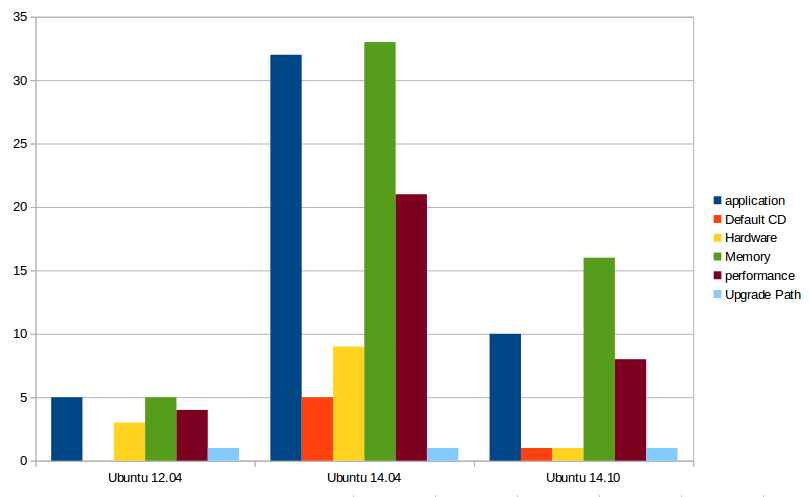 Arch vs Desktop Environment vs Release

Please do not use this to really compare desktop environments!  If multiple answers I took the least resource intensive one! (Next time I do this.. I should just require users to pick a primary one) 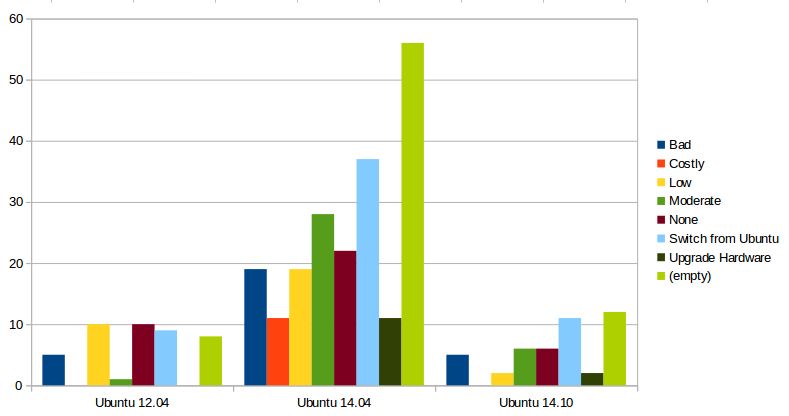 I think the original plan can still work, but like any good survey we know have more questions to ask!

Just to complete the application compatibility story (not from survey), Games are starting to be 64-bit only:

I'm considering a proposal to have 16.04 LTS be the last release of Ubuntu with 32 bit images to run on 32 bit only machines (on x86 aka Intel/AMD only - this has no bearing on ARM). You would still be able to run 32 bit applications on 64 bit Ubuntu.

Please answer my survey on how this would affect you or your organization.

Please only answer if you are running 32-bit (x86) Ubuntu! Thanks! 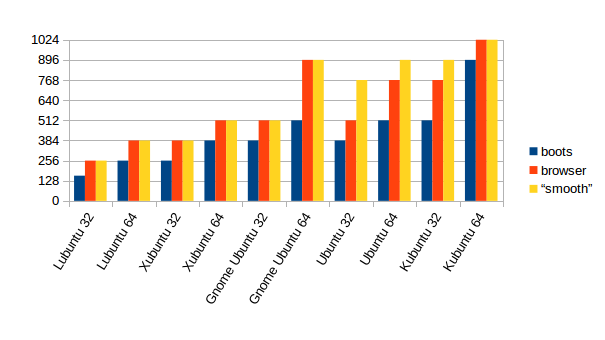 I did a comparison when 14.04 was first released on the memory usage of different Ubuntu flavors.   Some takeaways:

All testing was done in virtual machines (Virtualbox) and obviously with different hardware you're results will vary.   You can infer some of my methodology from the notes below.   This was done months ago and I don't remember all of the details.  The results may have changed with software updates, especially to Firefox.

In preparation for the Cherry Hill Library's XP to Linux Installfest I made a website, presentation and worksheet.

InstallFestPresentation Introduces Ubuntu and Lubuntu for non-technical users and also how today's installfest will work.

Items mentioned in the worksheet: The liability release is specific to this Installfest.   As for the survey mentioned, I'm very curious just how many non-pae machines or 32 x86 machines there are still in the wild.

Let me know what you think and feel free to modify/use/whatever.  (If you need a license consider the docs under Creative Commons Attribution 4.0 International License).

Results from my survey on 64 bit vs 32 bit usage on Unity.    The raw survey results are also available.  Feel free to do your own analysis.

Format:  # of machines - information about them..

Out of the 32 bit only machines:

1 - machine stuck at 12.04 because 12.10 requires PAE (is this true?) 1 - Parallels VM that has better performance on 32 bit from user 2 - that actually use other desktop environments cause they find Unity unusable ("Unity is unuseable because i only have 1 GIG Ram")

For some reason whenever I do a survey I expect that the results will clearly paint the way to go forward.   They almost never do, but they can be used to start discussions.  I'm particularly concerned about the 2 users with 64 bit capable machines which they can't get to run 64 bit.

Some people have 64 bit machines with low RAM and would also be better served with a lighter option.  Others have quite beefy 32 bit machines with 4GB of RAM and a nice video card that can rock Unity.   Also some motherboard manufacturers disabled 64 bit support even though the processor supported it...  awesome.

To default to 32 or 64 bit when downloading Ubuntu?

The basic theory is that there are very few computers in one of these groups that is also not in the other:

Help prove me wrong!  Answer the following questions (only submit if you answer yes to either):

If you can't see the form below, click here.