Lazy follow up to my previous post on the Raspberry Pi.  Here are some more recent benchmarks using a more up-to-date image:  http://openbenchmarking.org/result/1302242-BY-1205272AR49

Take aways:  Performance has improved greatly.   Still get's crushed by a P4, but performance per watt is now clearly in the Pi's favour.

Some of the tests failed because I don't have a monitor hooked up to me Pi.  (Like GTK perf).  With the Wayland changes, I guess I might have to review this again with one..

We track upstreams beta/rc repo, what they consider "almost stable", we consider worth getting extremely easy user testing.  We try to ship in Rolling Release archive, but with different package names.  This will not work for everything.   Some upstreams don't really have RC/beta releases, others might be too complicated to keep in repo.

For example, meta-packages for:  firefox-beta, linux-rcs, etc. Goal would be to evaluate doing this with packages in main only.  Others, like all of Gnome, might need a different plan.

We need data that we can get an idea of how stable a product is. Some combination of reported bugs, automatic bugs, weighted in different ways. The data should be generated from both the beta  and stable releases.

We also need to better connect users of the beta releases to upstream, faster, when they have a problem.

First - Big changes to stable release separated by 3 weeks initially.  New Kernel and new Xorg both want to get in?  Only 1 get's in every 3 weeks.  In this case I would suggest letting the kernel go first, then three weeks later Xorg get's in.   This limits the volatility of the rolling release by limiting updates from all coming at the same time. Second - Data driven modifications to buffering time, who get's in first, and what blocks what.    For a new kernel the data would come from that exact kernel in the beta package,   If we find that the kernel never breaks anything and is super stable, move it to just a one week buffer. Third - refine if we consider upstream to be "wrong".  Maybe Linux kernel rc3 and above is all we ship in beta package, etc.

Rationale: We need a new concept of a stable system for a Rolling Release.  It should take advantage of and contribute to upstreams own stabilization procedures (their "beta cadence") while limiting the rate of change (delta) users of the rolling release need to deal with.   As for using 'Months', they are way to arbitrary.  Some months there will be nothing interesting, others we could have a new kernel, Xorg, Unity, and Gnome.

Obviously, this isn't perfect and needs a bunch more refinement, I just wanted to get this out there before March 18th (the deadline for proposals).  Thanks for reading and please let me know what you think.

Below are the speedtests of two different routers using a wired connection.

Generally I like the older Linksys routers because I can install OpenWRT on them.  With my faster internet connection they can't really stand up to new routers though.  Worth checking if your router is the bottleneck in your Internet experience.

Speaking of new routers, I've been researching to buy with IPv6 support and preferably an open firmware out of the box.  I haven't been able to find one yet...Buffalo is a great choice for the open part, but doesn't have IPv6 by default.  In addition, the DD-WRT project appears to have stalled somewhat this last year.  In an ideal world I'd get a router who's manufacturer officially loads OpenWRT and enables IPv6 out of the box.   Am I missing said vendor? 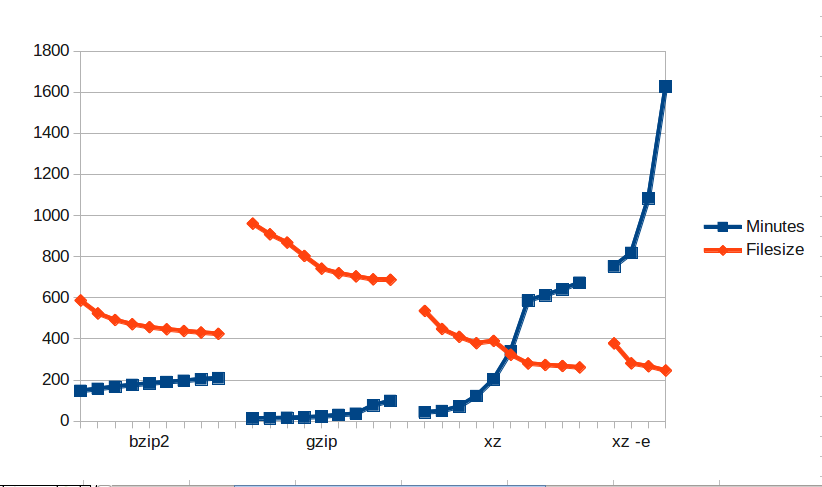 This is the best way I found to visualize this data.  Each compression method (bzip2, gzip, etc) starts at 0 or 1 (least compression on the left) and goes up to 9 (most compression on the right).   Except for xz -e which just does the odd numbers and 0. They are all compressing the same size file (it was a 32 GB database).

I think this graph nicely shows why xz (which is the same compression as LZMA2/7-zip) is getting so much traction.

Take a look at the raw data. Technical notes: I actually divided filesize (from ls) by 10000000 because it worked out better for the graph. I truncated the seconds.

I'm pleased to say that DuckDuckGo is now included as a search engine option in Firefox in the latest Ubuntu 12.10 release.  DuckDuckGo and Twitter are the only search engines that are secure by default via HTTPS.

As a brief comparison I searched for pidgin in the Unity Dash, Google, and DuckDuckGo.  Which results do you like better?

Starting with Google and Unity Dash: 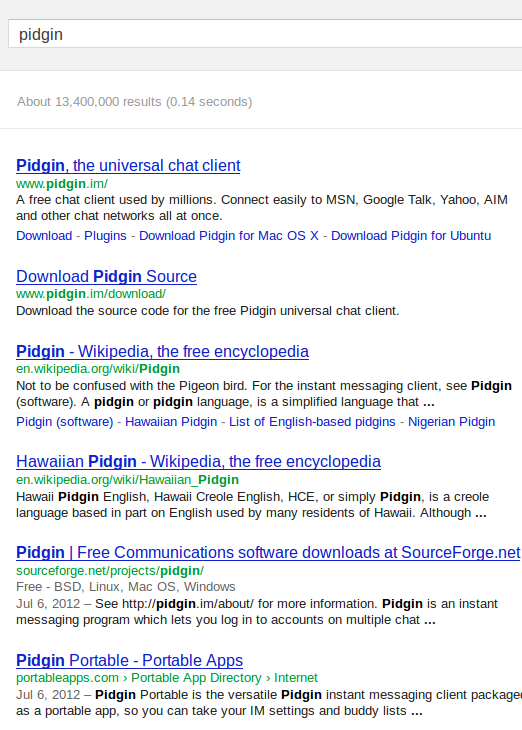 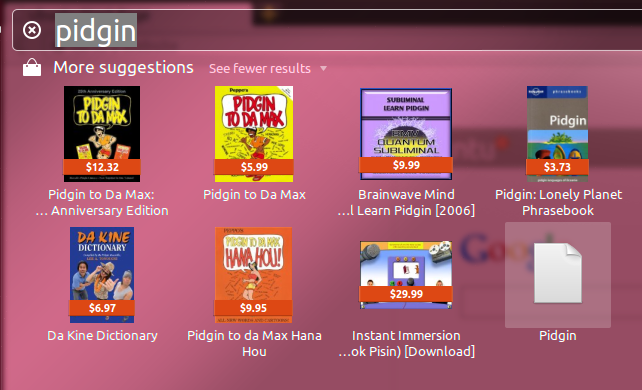 And Now for DuckDuckGo! 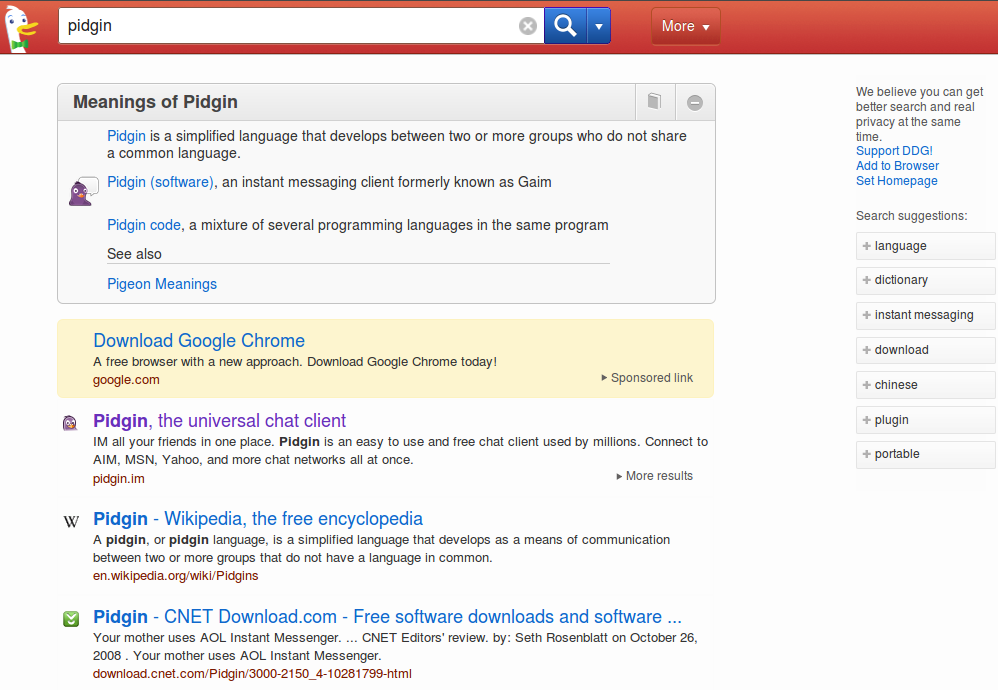 DuckDuckGo separates your search term into different uses, letting you further refine your search results or get instant answers from Wikipedia, dictionaries and many more sources.

DuckDuckGo doesn't track you or bubble you (customize your search so you rarely will be shown another point of view).  They also are partially open source and made it a goal to give back 10% of gross revenue to open source projects.

For a better overview of DuckDuckGo check out their about page, the introductory video is really nice.   This is just the start of a relationship between DuckDuckGo and Canonical, in fact they haven't even signed a contract yet.  Hopefully the relationship grows and enhances both projects.

A random smattering of Raspberry Pi vs an Old Dell P4 machine.

Unfortunately I labeled the Rasberry Pi, Debian (it is running the debian image, at least).  You can view the full results at OpenBenchmarking.org.  Most people are not buying a Raspberry Pi for the performance :), but it is nice to know just how much slower the Pi is.

The dell can pull between 70 - 120+ Watts, while the raspberry pi can pull 5.   Unfortunately, in performance per watt, I think the P4 still comes in first most of the time.  (The total test time on the P4 was less than an hour, the Pi I left overnight).  I didn't do much graphics testing, but the Raspberry Pi chip is physically better (not sure if it's being properly leveraged though).

...has something like this to show trust and encryption (the colors are off but hopefully you get the idea, the actual blue and green are much nicer on the eyes): [V] The Vanguard Group Inc, (US)   https://personal.vanguard.com/us/CorporatePortal

I'm curious if you can figure out what everything means in my proposal without explanation.

My overall goal was to try to communicate both a level of trust and a level of encryption, while making it easy at a glance.  In addition, giving us the option in the future to really separate these two concepts.

Looking for suggestions, comments, and feedback before I try to propose it to Mozilla.  Check out my previous blog post for what they are actually planning to do for Firefox 14.

Firefox is moving ahead with a new way to convey the security level of websites...See the differences for yourself.  Also including Chrome and Opera for comparison.

Additional Notes: Opera doesn't warn on Mixed HTTP/HTTPS Content, instead it just displays it as "Web" (no security markers) which certainly puts security first. Opera - when you click the url bar, the full URL get's displayed including http:// or https://, otherwise they are usually hidden except for trusted sites for some reason.   That actually makes me like hiding http/https by default.

Which do you think of the above is the worst?   The best?  Why?

For me, Opera would win if they didn't have the lock symbol.  Saying outright "Secure" or "Trusted" I think works quite well. Otherwise I still really like Firefox 12.  It is quite easy to teach to people (I teach a Firefox course every other month or so), and works quite well at a glance.

The other goal of the Firefox 14 change was to "reduce some visual weight".  Which I read as make what kind of page (secure/etc) stand out less.  In fact, out of the above Firefox 14 is my last choice.

It provides a false sense of security. If you tell people that a lock symbol means they are secure they are more likely to trust locks that are on the page or part of the favicon. Regardless if it's not displayed in the URL bar, it would still be on the tab.  It's not a big leap for a user to mistake one for the other.

The lock symbol does exist in Firefox 12, it will show up if you click on the Green or Blue bar. This keeps it from being something the user expects to see on the page though.

You can read more about the reasoning behind the Firefox 14 change here: https://msujaws.wordpress.com/2012/04/23/an-update-to-site-identity-in-desktop-firefox/

Discussion about the return of the lock:https://groups.google.com/forum/#!topic/mozilla.dev.apps.firefox/ODX1PJutsLM/discussion

I have no problem with Mozilla’s decision to remove the favicon from the address bar in Firefox 14, but I think losing the coloured backgrounds is a mistake.

It’s a lot easier to teach users to differentiate between blue, green and no colour than to explain the more subtle text/icon differences in the Firefox 14 screenshots.

I've ran into this situation before.. Had Linux installed on a machine and needed to reinstall/or install another distro. Fine, should be easy right? Load said distro on a USB stick and away we go. Unfortunately some (mostly older) machines can't boot from a USB stick. This annoys me (especially cause I really don't use writable CDs/DVDs at all anymore). It turns out if you already have GRUB1 installed on the machine, you can use that to boot the USB stick and even overwrite what's on the hard drive. This of course doesn't help you if you have no-OS or another OS -> maybe look at PXE booting.   I'm still haven't gotten this to work with GRUB2 unfortunately, they've complicated things a little.  Still it's useful for old machines.

If you haven't tried searching with Duck Duck Go, give it a try at duckduckgo.com

Learn more about how it protects your privacy and doesn't track you.. donttrack.us

Learn more about how it gives back to free and open source software. http://www.gabrielweinberg.com/blog/2010/11/help-me-start-a-foss-tithing-movement.html

I previously posted about trying to add Duck Duck Go directly to Firefox (that has stalled).   My proposal for Ubuntu is a bit different, I think it makes sense for us to replace Bing with Duck Duck Go.  Every search helps the company behind bug #1, in fact I would argue that including Bing helps them keep up their market-share.

If you like the idea of Duck Duco Go being added to Ubuntu's Firefox search box above, please show your support! http://brainstorm.ubuntu.com/idea/28078/

Also, and just as important as the above, Duck Duck Go provides really awesome results!  Try a few... https://duck.co/topic/wow-queries-that-showcase-ddg