I thought I was being smart.  By not buying through AVADirect I wasn't going to be using an insecure site to purchase my new computer. 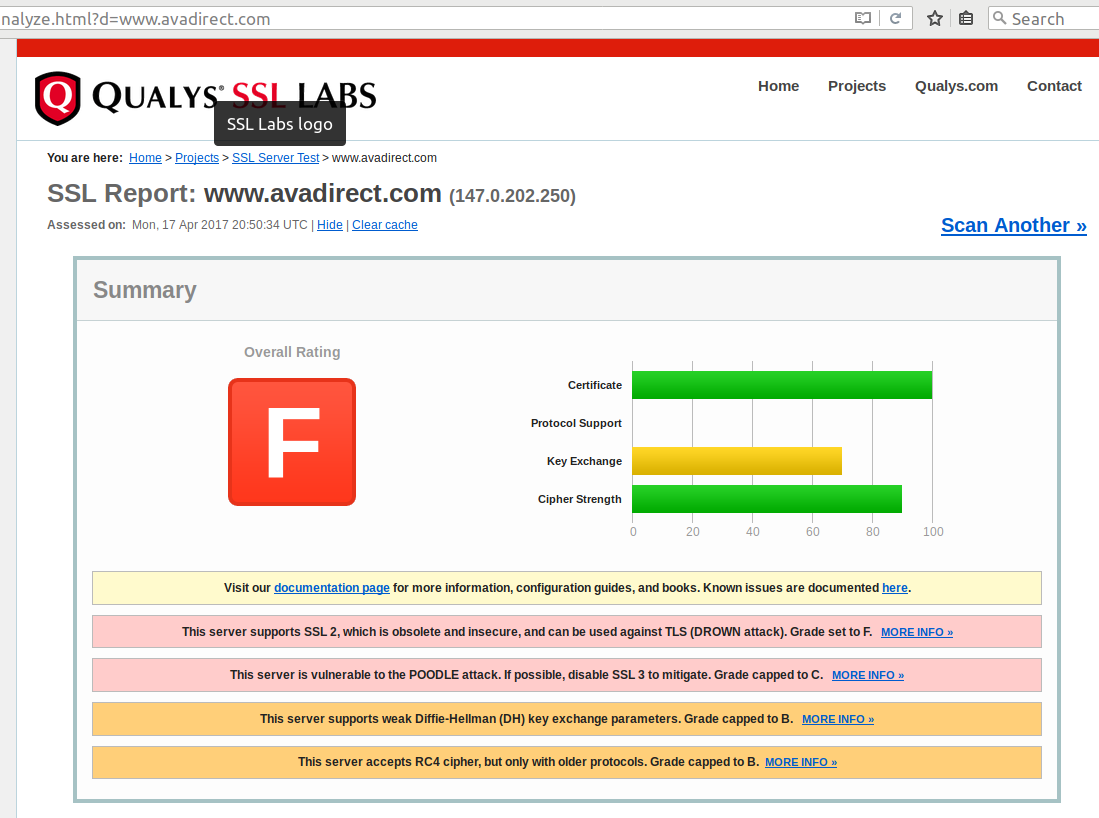 For the curious I ended purchasing through eBay (A rating) and Newegg (A rating) a new Ryzen (very nice chip!) based machine that I assembled myself.   Computer is working mostly ok, but has some stability issues.   A Bios update comes out on the MSI website promising some stability fixes so I decide to apply it.

The page that links to the download is HTTPS, but the actual download itself is not. I flash the BIOS and now appear to have a brick.

As part of troubleshooting I find that the MSI website has bad HTTPS security, the worst page being: 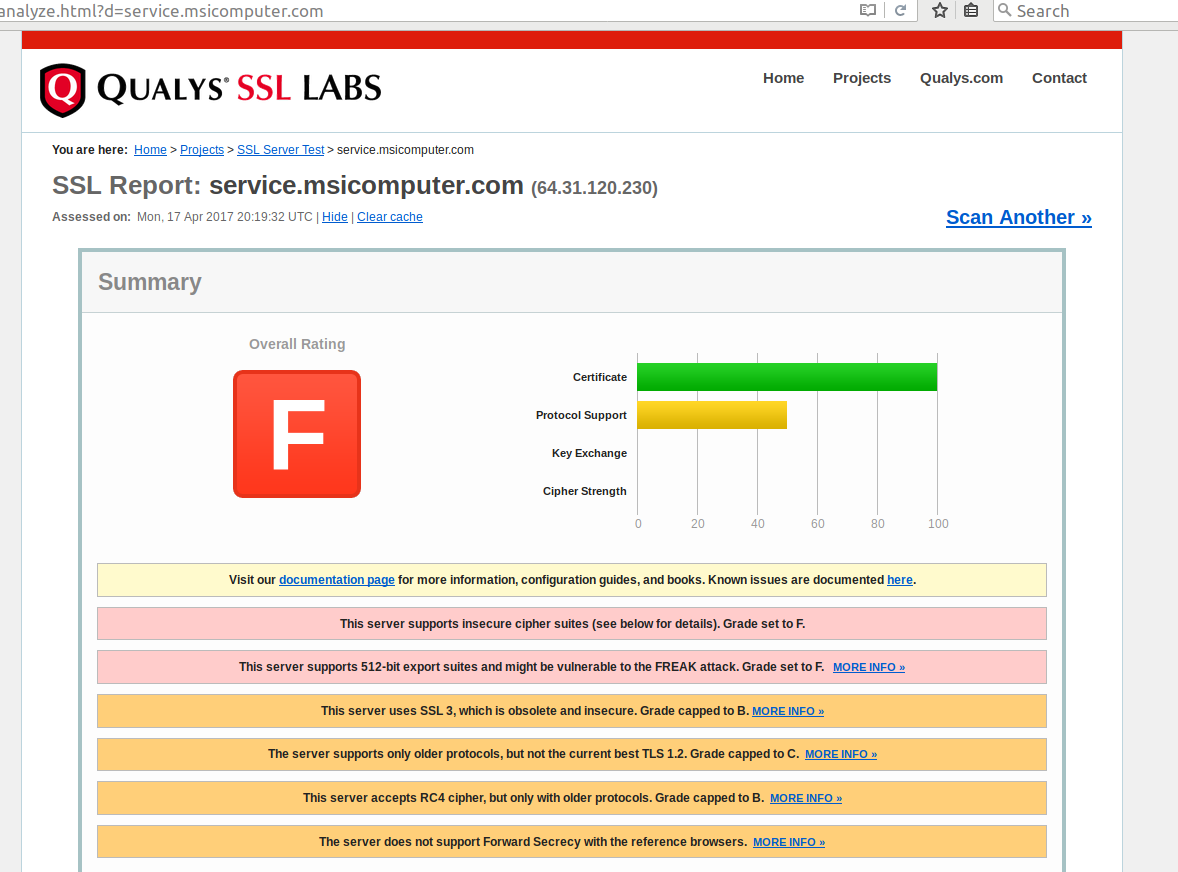 Given the poor security and now wanting a motherboard with a more reliable BIOS  (currently I need to send the board back at my expense for an RMA) I looked at other Micro ATX motherboards starting with a Gigabyte which has even less pages using any HTTPS and the ones that do are even worse: 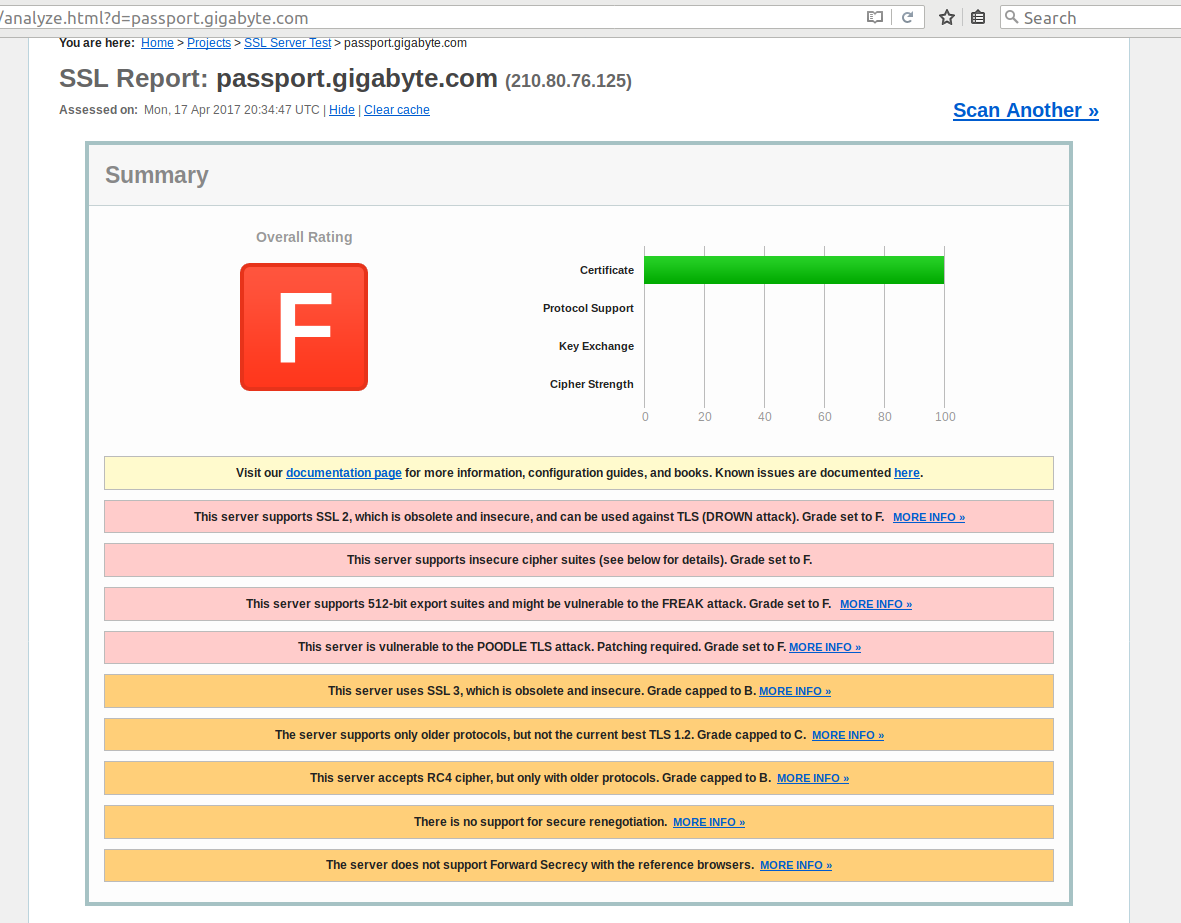 Unfortunately a survey of motherboard vendors indicates MSI failing with Fs might put them in second place.   Most just have everything in the clear, including passwords.   ASUS clearly leads the pack, but no one protects the actual firmware/drivers you download from them.

A quick glance indicates that vendors that make full systems use more security (ASUS and MSI being examples of system builders).

We rely on the security of these vendors for most self-built PCs.  We should demand HTTPS by default across the board.   It's 2017 and a BIOS file is 8MB, cost hasn't been a factor for years.

Some recent hacking attempts at my site had convinced me to reduce the number of logins I had to protect on my personal site.   That's what motivated a move from the -still- awesome Tiny Tiny RSS that I've been using since Google Reader ended.   I only follow 13 sites and maintaining my own install simply doesn't make sense.

I decided to try it out and haven't looked back.  The interface is certainly different than Tiny (and after 3 years I was very used to Tiny ) but I haven't really thought about it after the first week.   The only item I found a bit difficult to use was arranging folders ~ I'd really prefer drag and drop.   I only needed to do it once so not a big deal.

The free account has some limitations such as a limit to the number of feeds (64), limit to how fast they update, and no ability to save stories.   The premium account is only $24 a year which seems very reasonable if you want to support this service or need those features.  As of this writing there were about 5800 premium and about 5800 standard users, which seems like a healthy ratio.

Some security notes: the site get's an A on  SSLLabs.com but they do have HSTS turned explicitly off.   I'm guessing they can't enable HSTS because they need to serve pictures directly off of other websites that are HTTP only.

NewsBlur's code is on Github including how to setup your own NewsBlur instance (it's designed to run on 3 separate servers) or for testing/development.   I found it particularly nice that the guide the site operator will check if NewsBlur goes down is public.  Now, that's transparency!

They have a bunch of other advanced features (still in free version) that I haven't even tried yet, such as:

Give NewsBlur a try today.  Let me know if you like it!

I'd love to see more of this nice combination of hosted web service (with paid & freemium version) and open source project.  Do you have a favorite project that follows this model?   Two others that I know of are Odoo and draw.io.

NewsBlur is awesome. I have been using it since the demise of Google Reader with no issues and almost no downtime. It has been getting better and better, especially the Android app.

I tried NewsBlur a blue moon ago. How it may’ve changed I don’t know, but I’ve kept steady with CommaFeed (with a few hiccups in between with service availability in the first few years and loss of all starred items) since the demise of Google Reader. It’s open-source too: https://github.com/Athou/commafeed

Are you running i386 (32-bit) Ubuntu?   We need your help to decide how much longer to build i386 images of Ubuntu Desktop, Server, and all the flavors.

There is a real cost to support i386 and the benefits have fallen as more software goes 64-bit only.

Please fill out the survey here ONLY if you currently run i386 on one of your machines.  64-bit users will NOT be affected by this, even if you run 32-bit applications. http://goo.gl/forms/UfAHxIitdWEUPl5K2

The latest Ubuntu LTS is out, so it's time for an updated memory usage comparison. 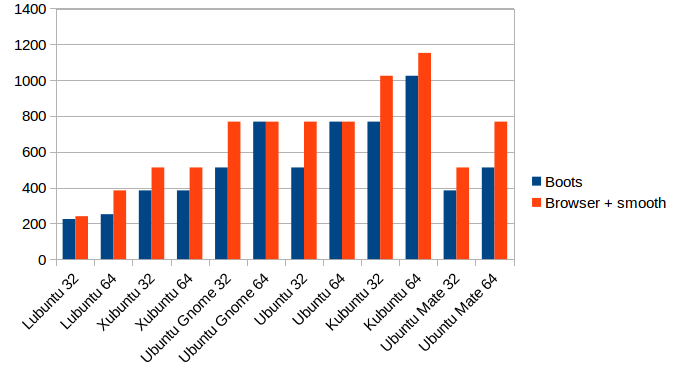 Boots means it will boot to a desktop that you can move the mouse on and is fully loaded.  While Browser and Smooth means we can load my website in a reasonable amount of time.

Lubuntu is amazing in how much less memory it can boot in.  I believe it is still the only one with ZRam enabled by default, which certainly helps a bit.

If you are memory limited, change flavors first, 32-bit won't help that much

Looking just at "Browser and Smooth" because that's a more clear use-case.  There is no significant memory  difference between the 32 and 64 bit varients of: Xubuntu,  Ubuntu Gnome, Ubuntu (Unity).

Lubuntu, Kubuntu, and Ubuntu Mate do have significant deltas, which let's explore: Kubuntu - If you are worried about memory requirements do not use. Ubuntu Mate - It's at most a 128MB loss, likely less.  (We did that to 128MB accuracy). Lubuntu 64 bit is smooth at 384MB.  32 bit saves almost 144 MB!  If you are severally memory limited 32-bit Lubuntu becomes your only choice.